Wyoming Rural Water's mission is "To provide the assistance necessary to meet the needs of our membership and to ensure the protection of Wyoming's water - our most precious resource.

About WARWS
Join
JOIN WARWS
What do you get for your membership?

Access to top notch technical assistance; access to world class training at reduced prices; access to leading suppliers at your finger tips; advocacy for reasonableness in regulation development and implementation.

Blow right on to WARWS Spring Training Conference which is happening live and in person. We have survived pandemics, economic shutdowns, and Wyoming winds. See you in Casper.

The city of Casper has closed water access to Lake McKenzie due to the possible presence of harmful cyanobacterial blooms.

In a press release, the city advised both humans and animals — in particular, dogs — to stay away from the north Casper lake for the time being. The Wyoming Department of Environmental Quality (DEQ) is investigating the blooms, which are dense concentrations of what is often known as blue-green algae. The blooms can be harmful to both people and pets.

Parks staff reported “a small concentration of an algae-like substance in a contained area in Lake McKenzie” to the DEQ “earlier this week.” The DEQ will test samples next week to determine if the substance is indeed a bloom.

BOISE, Idaho (AP) — The federal government is suing a small Idaho town near Grand Teton National Park for dumping toxic waste from its sewage treatment plant into a stream that feeds several scenic rivers in the region.

The lawsuit from the U.S. Department of Justice was filed in Idaho’s U.S. District Court on Monday.

The federal government contends the city of Driggs violated the Clean Water Act by dumping effluent with too much ammonia or violating other wastewater rules more than 2,600 times over the last seven years.

In written statement, the city of Driggs said the lawsuit was a positive development because it will allow the EPA and city officials to work together to come up with solutions. 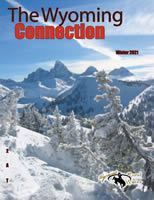 The Wyoming Connection is the official publication of WARWS; Just one of the perks that is only available to WARWS members!

The mission of the Wyoming Association of Rural Water Systems is: To provide the assistance necessary to meet the needs of our membership and to ensure the protection of Wyoming's water - "Our Most Precious Resource".